Eventually, you’re just OK. You’ve become who you wanted to be, you can handle it – and you finally get to feel those feelings again. Loving, like you’re loved. Sharing. That’s worth staying alive for. There are people who KNOW. There are people who can feel it too. This is the future, the feeling. Stay alive.

You are everything you have thought, you are everything you’ve done. You are everything you will do, you are everything you could do. Sometimes you run into the wrong people. They put a stake in you, for themselves, not you. If they wanted to help you, they would. They’d ask you questions and put you on the right path. But for them, it’s about keeping you tethered to something they believe. They can’t see the everything you think about, your potential. It’s what they see and how they see it in their corner of reality. It’s a terrible waste of time to get locked up in this kind of smallness. I can say, I don’t even know the point, other than it’s just some myopic bullshit. Who cares what they think, what they say about you. If they believed in you, they’d be helping. It pulls against you, something from the past – some name, an anchor in a kind of wasteland. A hungry ghost. OK, whatever you say. Have fun. You can just imagine them turning and talking – ha, ha, ha, blah, blah, blah. I guess you know everything. They weren’t even close to figuring you out. They were about putting you in a place and keeping you there. I don’t even care to know why. It’s so small. It’s such a waste of time. If people like this stand between you and an institution, get yourself a new institution. You’re an institution. Because by the time you do your thing, tell your story and everyone’s saying, I didn’t know that – I didn’t realize – you say, yeah, that’s because those people are grotesque. Look at them, watch them. It’s a web of disdain. It’s a house of shame. NOT INTERESTED. My thing is bigger, brighter, louder, prouder, softer and way more beautiful. Because it’s these people after the fact, scratching their heads saying, I didn’t know. You didn’t WANT to know. You aren’t big enough to know. So – go home, leave me out of it. OK? See, they’re talking about you BECAUSE they know you’re more talented, more amazing, more beautiful. A good person would say – why don’t you shut up and DO something. Why don’t you shut up and DO something? Goodbye ghosts! Goodbye 1994, 1995, 1996, 1997, 1998. Goodbye forever! Cause the I didn’t know, or, I’m sorry – that’s really about you not being intelligent to know what’s possible. It’s not on me. It’s on you, and if you’re trying to hurt me – well, that’s just mean – because I’m a beautiful man.

When something bad happens, it changes you. You can’t be who you wanted to be…or who you felt you were supposed to be. It’s a battle in the mind. I wanted to do something I couldn’t do. It was elusive, just out of reach. I had potential, I was on a path. As is happens, I ran into a patch of trouble. I got side-tracked. It hurts, because, there were other people who got hurt as well. The people I was connected to. I lost control. Well, I wanted to use my potential to help. The battle in the mind is disbelief. I can’t believe I got cast down like that. I got stepped on, mixed up, silenced. I lost people…because I couldn’t say what I wanted to say. It’s a tough pill to swallow. Oh god, not again. But, that is what happened. There were people who stood in the fire. Very, very few. But there were people who weathered the storm for short bursts. Those are the people who saved me. Someone held me – we held each other, for a month. And then I lost her. Someone broke for me and I broke for her. I got kicked in the face and then I lost her. Someone spoke to me, I spoke to her. Then my mind and words were mixed up and I lost her. The blame comes down on you, but what about the people came at me? Something happened. You get knocked down and they think they have you. It’s not for their edification that I write. In Chicago, Sam Saunders helped me stand on my feet again. We walked with the crack-sellers and I saw dignity. These kids were survivors. On the streets, the kinds of attacks that took me down are repaid in violence. I learned about strength and retribution. I missed out on those connections, the ones I earned. But here I am. What does a man do when he’s fully on his feet again. Those people I loved, are they whole and open to see me? Everyone has a life. I lost part of mine – I had it taken away. But, you’ll see. You’ll see what I did when you weren’t watching. I like the street. I like the hustlers, I like divine justice. I like the poetry of courage and broken minds. Shhhh. Quiet. Shhhh. There is 911. There it is, the internet. There it is, new media. There it is, New York, San Francisco. Talk, talk, talk. I did something classical. I did something remarkable. I did it old-school. You just saw a part of me. So, if you care – well, pay attention. This isn’t a promise. This is a prayer. Listen to me. Listen.

There is a complexity to the artist’s psyche that is paradoxical. It’s the nature of revealing. You are trying to be vulnerable to people who alternatively just don’t give a shit, those who want to see you fail, and those who might actually need some help. You’re doing it for the people who need inspiration…you would’t be doing it if you were OK. It’s the life process of finding out what OK is by putting yourself out there. Some people don’t try. I did it obtusely like throwing shit at the wall. You can learn a lot from the shit-talkers. If they were doing something, they wouldn’t be talking. But, they really have no use for you if you aren’t in their sphere. It’s a clique of self-importance. The true purpose of the art is for the traumatized to see hope through the horror – and then, finally – society becomes a thing that doesn’t create so much pain. We’re living in a post-apocalyptical aftermath. So, the extent of the losses and shame you face – is to be about as ruthless a cunt as possible and as soft a lover as to be found in history. Ideology is a ruse for desire. It’s about desire, and everybody wants to be the center of the universe. Except, if you don’t actually do anything – you’re just a shit-talker. So God bless the talentless. If I were you and just starting out – stick to science and don’t tell anyone anything about yourself. Try to learn not to feel. Anybody who’s trying to feel is looking for trouble. It’s hell. They’ll say you’re narcissistic. Not if it’s true. Not if you’re the real thing. And why? So you can be beautiful to HELP people, duh. We’re human beings not diamond rings. Get a grip. Eventually – you’ll get good at what you do, you’ll get the thick skin you need to tear through life. You’re a shark who can’t stop swimming. Get burned. Get destroyed. Rebuild. Your beauty seeps through the cracks and then you start to see – there is no time. It’s only connection. It’s only love. You lost the ones you love keeping your enemies close. Forget them. I love you so much it breaks time. The old stories are fictions. Why you gotta be like that? The only truth is now, now, now. You can only see what I see if you love me. Let’s love together. I’ll teach you violence – I’ll show you everything I know. This is what love feels like – destruction. I will turn you into a wilderness with earth-fire. You can’t mediate a legend. I’m not a sweater. 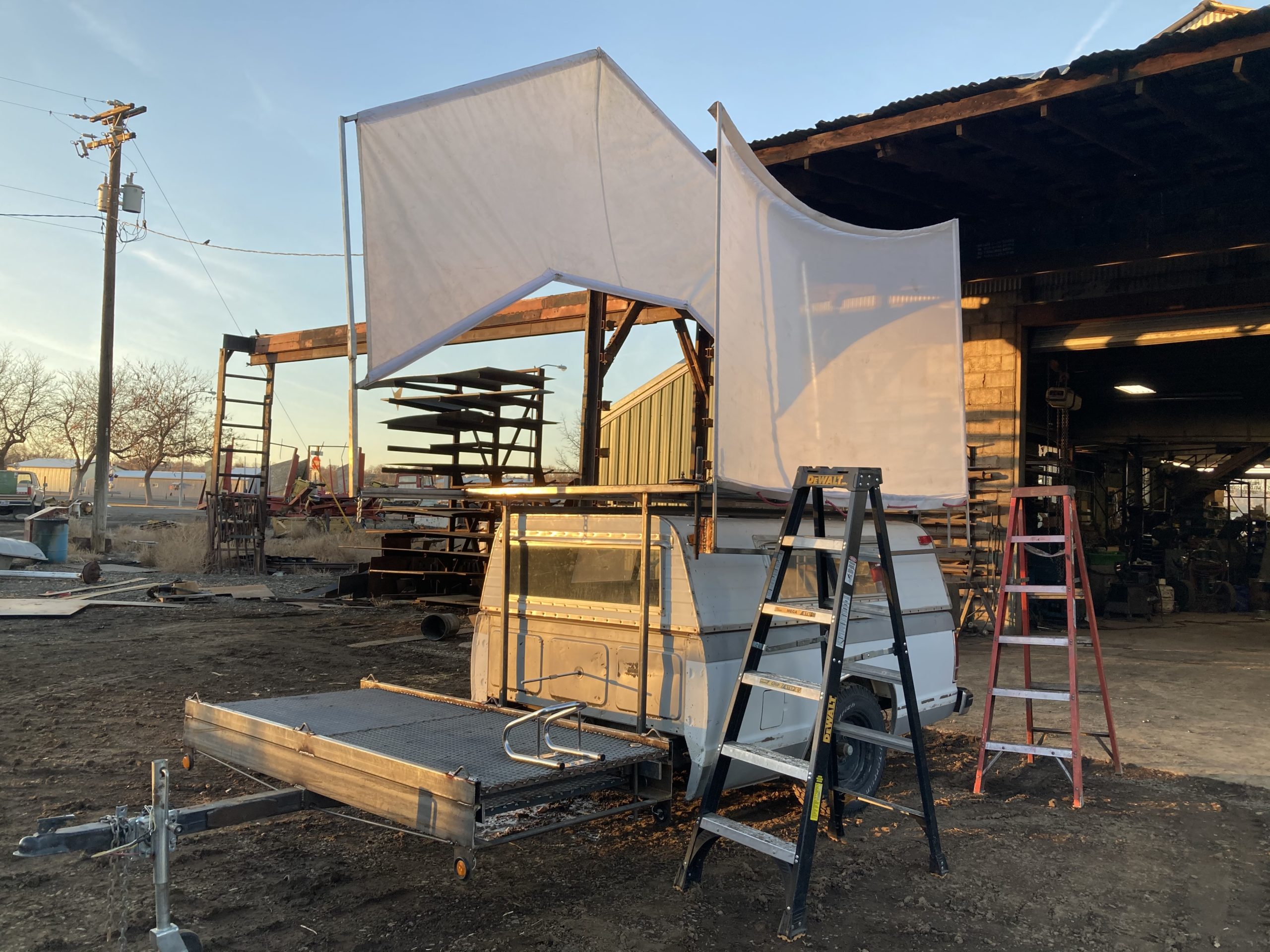 A Ken Kesey kind of thing – Never – this cart carries my art supplies and can hold 2 of my projection screens. Some Catholics helped me build it, though – I wonder if they followed the 10 Commandments, it was SO expensive! The voile screen on the right swings out to 90 degrees. I’ll get this out into the wilderness with some projectors, a sound system and throw down post-modern like I do.

Stay Here With Me

Summer, I know, is pushing the roses;
When cut from the earth
They’re not meant to last.
I am a sign, I am a road.
You must be seeing to know where I go.

I am suspicious that nobody hears
No matter how hard I pray –
It’s not what I need.
You are my garden, you are my heart.
What can I tell you
Now that you know?

You’re kind. That mind!
You say things, your feelings.
I’ve been here some time –
Just wishing someone needs me.

PART ONE: GROWING UP